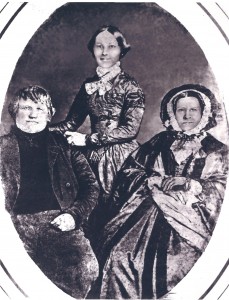 In 1806, Dennis Kelly -a very successful merchant- his wife, Mary and their daughter, Margaret, emigrated from County Donegal, Ireland, to Philadelphia. After spending a few weeks in the city, Mr. Kelly arrange for a business venture in Pittsburg. The first leg of the journey was a stagecoach ride along the Haverford-Darby Road to connect to the Lancaster Pike beyond Philadelphia. As the stage neared the little village of Coopertown, the teamster was using loud, vulgar and obscene language. Mrs. Kelly asked the man to stop his offensive talk. When he refused, she insisted that the coach stop immediately so that she and her family could get off.

The Kellys walked to the nearest inn to consider their situation. They had no place to live, and they could not get back the money they had paid in advance for the trip to Pittsburgh. Mr. Kelly found work in powder and textile mills along Cobbs Creek, and over the next few years accumulated sufficient funds and connections to go into business for himself. He established a family home on what was known as the Hermitage Farm, which was also the site of several of his mills. As immigration from his native Ireland increased, many of his countrymen arrived in Philadelphia with one piece of advice in mind: “If you want to go to America, the saying went in Donegal, “see Dennis Kelly.” Soon a large community of fellow Irish was established in the area of Mr. Kelly’s mills and homestead, forming the district now know as Havertown.

While in Philadelphia, the Kelly family had attended Old Saint Augustine’s Church, and Mr. Kelly had befriended the Augustinian priests who served there. Around 1815, he invited the Augustinians to celebrate Mass in his house for his family and employees. In 1822, he donated land to Bishop Conwell for a parish church and cemetery. The church was built in 1825 and named for SAINT DENIS, a martyr and the first bishop of Paris, who was also Mr. Kelly’s patron saint. Mr. and Mrs. Kelly signed the deed over to Bishop Conwell, who dedicated the church in 1828.

Augustinians continued to serve the parish as a mission from Villanova until 1873, when a resident pastor was appointed. In 1858, ground was broken for a new church, dedicated in 1869. The present church was dedicated in 1948. The first parish school building was opened in 1864, and another building was constructed in 1924, when Sisters of Mercy arrived to serve on the faculty. Augustinians served the parish until the 1990s, when archdiocesan priests were appointed to the parish.